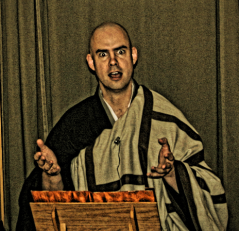 Like some people sing in the car, I give Dharma talks in the car. I get an idea in my head, and on my way to this or that temple, I riff on it, try to make it come alive. This isn’t rehearsal for some future talk–these days, I do very little public speaking, and since it’s all in Japanese, it’s hardly spontaneous.  I don’t know the next time I’ll sit with a group and feel free to just speak freely about practice. But I deliver these talks in the car, and as I do so, I can feel passionate about what I’m saying.  No doubt more than one driver at a stoplight has looked at my face and wondered what I could possibly be so worked up about.  It’s not that I give stirring talks, or that I get lost in the performance of it. I can’t measure any of those things. But what I have found, over years of speaking to others about Buddhism, is that my primary audience member is myself. I look back at every single talk in which I felt at all inspired, and it is clear that I was actually giving myself a pep talk in front of 10 or 30 or 200 people. I’m telling myself–as best I can–what I need to hear in order to push more deeply into the practice, or to let go of a useless idea, or to do what I know my teachers expect me to do. I’m not teaching.  I’m not bestowing anything on anyone.  If anything, I’m just exposing myself.

When I first encountered the teaching referred to as nyohō, it was as a novice monk, and it was simply a lens by which to measure if I was doing things properly according to the rules of the monastery.  I liked it–I liked the aesthetic of it. But it was also like a set of rules, something very clearly defined, and also very limited to that traditional context. It wasn’t until after I’d left the monastery that this question of how to express the Dharma physically–and in all contexts–really came to life for me. I found that I had made that lens a basic part of how I look at the world. And in the last couple years, as I’ve looked through that lens and chewed on the questions it raises, it’s become obvious that the teaching of nyohō has profound implications for how we understand not just monastic life, but also family life, our role as consumers, our relationship to the environment, and more. It’s thorough–as one might say in Japanese, it goes all the way to the bottom.

So this teaching has become a kind of soundtrack to my life, a question constantly in my ear.  But that doesn’t mean that I live it out. Part of my interest in writing this blog is to have an excuse to really examine the tradition, to write down what I learned in those monastery walls and try to see how it all fits together. But the bigger goal is this: to force myself to write down those things that I intuitively know but ignore anyway. This teaching informs my day-to-day decision making in lots of little ways, but really, only when it’s not too inconvenient.  I can see how one could make major changes (in schedule, in diet, in spending) in order to bring one’s life more into “accord” with the Dharma–I would like to push myself to explore more of those directions and see where they lead. So this blog, too, is a pep talk to myself–me gesturing emphatically to no one at a stoplight.

3 comments on “The Song Stuck in my Head”