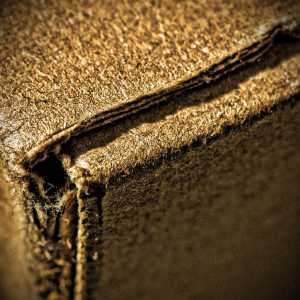 If you’ve ever been to Japan and visited temples here – especially the more famous ones – you were probably impressed by the scale. Dharma Halls, especially, tend to have incredibly high ceilings, but the room is basically empty; you might find yourself looking for the beams, trying to figure out how it stays standing. The Dharma Halls of Eiheiji or Sōjiji, when no one is around, can feel like empty stadiums, or really ornate airplane hangars. It can all seem a bit excessive.

But if you were to visit those same rooms in the morning, during chōka (朝課, morning service), you might have trouble finding a place to sit among the 200-plus monks in training, temple officers, and visitors. It’s not wasted space.

I haven’t written too much about the technical side of nyohō, in spite of the name of this blog. One of the more difficult aspects to describe, for me, has to do with space, so I thought I’d start there.

From the point of view of the tradition, “housing” refers to the sōdō, or monks’ hall, where monks do zazen, eat, and sleep. It expands outward from there to include the whole temple (which, if it’s a monastery, is also referred to as a sōdō). But that’s just a starting point, a useful reference to something measurable. The point is to apply these teachings to the space we’re in, to our homes, to our own location.

How do we determine the “correct” size of something? This is not about big or small. It’s about finding what is just right.

We see this idea most clearly in ōryōki, the bowls traditionally used in temples for formal meals (行鉢, gyōhatsu). The ō in ōryōki (応) means “appropriate”; the ryō (量) is “amount.” When servers come with rice and soup and vegetables, we hold out our bowls and signal when we’ve received just what we need. If you’re not hungry, you need not take a lot; if you’re a big eater, you can ask the server to fill the bowl, then to fill it again later on. One of my teachers is fond of pointing out that in the Zen world, equality doesn’t mean that everyone gets the same thing – it means everyone gets what they need, no more or less.

In a building, of course, “just right” can’t be determined on a purely individual level. Buildings are group spaces; “enough” has more to do with function than with whether someone is big or small. A simple example can be found in the sōdō: 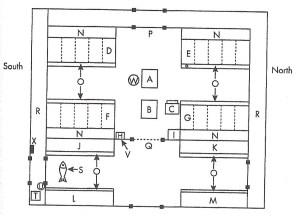 D, E, F, and G are the jō, where monks sleep, do zazen, and eat (in this case, five monks side by side). Each space is about 3’ x 6’, big enough (barely) even for me. (Bedding and personal possessions are kept in a short cubby called a kanki (N). But what I want to point out is the space in between the jō, marked by ‘O’ and arrows. Most of the time, nothing happens there, but there are ceremonies in which people get down from the jō and do prostrations, facing one another. So this space is measured in terms of that function – it has to accommodate two average-sized people bowing, foreheads to the ground, without bumping into one another. That much space, and no more (because in the nyohō world, nothing goes to waste).

This is one side of nyohō, an important one. We establish, physically, an atmosphere of practice, a place of encouragement. We orient ourselves toward the practice, but we also create spaces which are themselves oriented in the same way. This is not magical; it’s not feng shui. It’s something felt. It’s an opportunity to look beyond our own preferences and allow what looks mundane to be an integral part of our own intentions.

That’s one side. But another is that we are where we are. Wherever you are, wherever you’re reading this, that is your place of practice. Space is determined by function, but function is also determined by space – if a sōdō is not built with a particular ceremony in mind, then that ceremony has to change. This is your location, and in this moment, the question of how you arrived here is irrelevant. It’s what you do now, what you’re doing now.

There’s an incredible generosity in trying to put a teaching like nyohō into practice, in shaping that space for others. But there’s an equally great humility – and power – in using the space you’ve been given. Traditional Zen training, in so many ways, is an exercise in putting ourselves in smaller and smaller boxes, in closing the walls in around us. In a monastery, we literally give up our idea of what is “mine,” but even if we’re sitting at home, we do zazen according to a prescribed form. We accept those boundaries. We don’t move. It’s my experience that when we make the box so small that it seems we can’t move at all, when we choose that, the box ceases to be a box, and the world around us opens up into a vast field,  open sky, ocean in all directions.

Do you feel constricted, right now, in your life? Where are your walls?

What, for you, is your function? How do you make that the function of where you are, in this moment?

How do you measure your world?

(Sodo image above borrowed from Practices at a Zen Monastery — Clothing, Eating, Housing: Being in Harmony with the Dharma by Tsugen Narasaki, published by Zuioji Senmon Sodo.)

What are your thoughts? Cancel reply