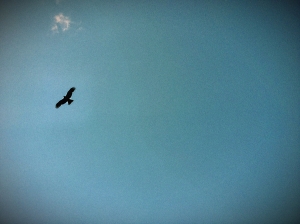 The Buddha realized enlightenment sitting under the bodhi tree.  —No, wait, that’s not the right place to start.

Let us start here instead:  the Buddha was an ordinary human being.  He went to the toilet, got hungry, had to trim his fingernails.  Some accounts say he suffered from severe back pain for much of his adult life—perhaps a consequence of his years of self-brutalizing ascetic practices, his attempts to transcend the body all together.  The imagery and myth accumulated over the last 2500 years would have us believe that he was extraordinarily tall, or that he had weirdly long earlobes, or that his skin was golden; he had special birthmarks designating him as a Buddha, including (by at least one account) rather frightening genitalia.  All these signs are supposed to reveal that he was a true Buddha, that he was the genuine article, that he was special.  But the Buddha was an ordinary human being.  He looked like the people around him.

The true signs of a Buddha are not what we imagine them to be, not at all.

The Buddha realized enlightenment sitting under the bodhi tree. We don’t know what this means.  We cannot know.  It’s his word—we can believe or not, but he could not prove it in any scientific way, then or today.  Nor could he describe it—not if enlightenment is as total as teachings tell us it is.  This moment of enlightenment would appear to be the climax of the story, but it’s really just the introduction.  It’s not even the most interesting part.

After a while, the Buddha stood and began walking towards Sarnath, where his former companions continued in their ascetic practices.  They had deserted him after seeing him step away from self-mortification and towards a “middle way,” one which found a healthy balance between the comfort of the senses and the total rejection of the body.  He had bathed and eaten a wholesome meal—from his companions’ perspective, he had betrayed them.  So when they heard of his approach, they agreed that they would not even acknowledge him.  He would receive no welcome, not even a greeting.  But as his figure appeared in the distance, they caught sight of him, and they watched in silence.  They said nothing to one another, but when he arrived at their spot on the grass, all in unison bowed and asked to be received as his students.

What did they see as he walked across the grass?

This is the true story of Buddhism, specifically of Zen.  This is the start of the wordless transmission.